Ahead of her new show in Shanghai, controversial graphic and new media artist Lu Yang talks about art, life, death and Parkinson’s disease 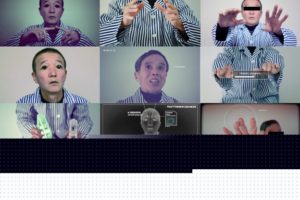 Images from Lu Yang’s series “KRAFTTREMOR,” which deals with Parkinson’s disease.The most surprising thing you first notice about Chinese artist Lu Yang when you meet her is the energy that emanates, almost audibly buzzing, from her small frame.

As the 26-year-old talks of her life and work, her voice is staccato-paced, but not unpleasantly so, her words tumbling in quick succession from her mouth with the urgency of someone who has an important point to impart to her audience.

Sitting across from this diminutive talent, it’s difficult not to admire the intrinsic confidence she carries through both her personal style and her work.

It will be shocking to people. But any reaction is OK because it’s much better than people just looking and walking away. I just want any reaction.— Lu Yang, Chinese artist

After leaving home to pursue her artistic dreams at the China Academy of Art in Hangzhou, one of the country’s most prestigious art schools, Lu Yang focused her studies on new media and studied under Zhang Peili — commonly known as the father of video art in China.

Zhang’s spirit has influenced his charge, because while much of the work by young artists, and indeed, new media artists in China today tends to err on the conservative side, Lu Yang’s exuberant embrace of her own unique brand of bioart (art which is concerned with scientific practices, biotechnology and living organisms) is anything but.

“So many works of mine are from ideas about biology and death and life and living things,” says Lu Yang.

“These kind of ideas people can understand. People might have different culture and different experience, but they have the same kind of biological feeling, all living things can feel this.”

Despite, or perhaps because of, the confrontational nature of her work, Lu Yang has been embraced by critics both at home and abroad, who have labeled her Chinese art’s “next big thing.”

Martin Kemble is the Director of Art Labor 2.0, which has represented Lu Yang since he first came across her work when she was a student.

In terms of the reaction from the art world and the public, Kemble says Lu Yang has created a “phenomenal level of interest, and more inquiries than any other artist we have ever worked with.”

Shanghainese artist Lu Yang is coming home for her next show.In terms of talent, Kemble is unequivocal in his praise.

“She is without peer,” he says. “An artist like this comes along once in a generation.”

Given the fact that Lu Yang’s graphic and new media works include subject matter such as dissected frogs, sexual fetishism and even, on occasion, torture, it’s fair to say that it’s not for everybody. But that, according to the artist, is the point.

“It’s very important [that people have a visceral reaction to art], especially in this kind of society where we have different stimulation from things like television and movies,” says Lu Yang.

“People always have so many messages and they don’t feel or care about anything. I must have some way to catch their heart, so they can understand and really think about something.”

Big ideas seem to consume Lu Yang, even though they lead both herself and her audience to some pretty uncomfortable places — science and religion are both favorite topics for the Shanghai native, who was raised Buddhist.

“I want to shock everybody and if they will think about things more, it’s good — and if they think it’s horrible or if they get angry at me, it’s OK,” Lu Yang explains.

“In my experience, asking questions about science and religion does not bring a result; these are just questions, but the questions are still important.”

Speaking of her one of her most controversial works, “Dictator E,” in which amphibious creatures are shocked by electric currents, Lu Yang is obviously troubled by the fracture between her beliefs and artistic sensibilities.

“Buddhists believe it’s not good to hurt any living things, but in my works I really do that,” Lu Yang says.

“Maybe in my mind I’m a devil. So the art makes me a devil. I want to do this kind of work because of the art. The art is the most important thing. I don’t really want to hurt animals, I just use this idea to stimulate people’s thinking.”

A matter of control

A diagram that’s part of Lu Yang’s series “KRAFTTREMOR.” It details the instrument connection for treatment of Parkinson’s disease.According to Lu Yang, the use of electricity combined with biology in many of her works comes from an obsession with the idea of control — another theme that is prevalent throughout her art.

“Electricity is a miracle,” she exclaims. “If you put electrical currents through your body, you can’t control your body. It’s very natural, a natural condition. It’s not controlled by man, it’s controlled by nature.”

This theme carries through to her latest series of works, “KRAFTTREMOR,” which deals with Parkinson’s disease, a degenerative condition that affects the central nervous system, causing tremors and loss of motor skills.

It’s very important [that people have a visceral reaction to art], especially in this kind of society where we have different stimulation from things like television and movies. People always have so many messages and they don’t feel or care about anything.— Lu Yang, Chinese artist

In other words, the ultimate loss of control over one’s own biological functions.

Currently, the most effective mode of treatment is deep brain stimulation (DBS), a surgical procedure that helps sufferers control their tremors, but, on the other hand, is also able to control the patient’s behavior.

The series includes a video installation, digital prints, music video and documentary materials related to the contradictory relationship between Parkinson’s disease and its treatments, including diagrams and animations the artist has produced to introduce both disease and treatments.

In a fairly spectacular example of the relationship between the controlling and controlled, a music video shows elderly Parkinson’s patients in pajamas having their tremors transformed into electronic rhythms.

You don’t have to like it, but it’s hard to see it and not be provoked.

“It will be shocking to people,” Lu Yang says. “But any reaction is OK because it’s much better than people just looking and walking away. I just want any reaction.”

According to Kemble, a reaction is exactly what Lu Yang can expect, along with a future at the pinnacle of the Chinese art world.

“She is setting a new bar for the coming age in contemporary art here,” he says.