While the new media artist Lu Yang was studying at the China Academy of Art in Hangzhou in the 2000s, she drew up a series of works dealing with mind control. Many were deemed too sensitive, even borderline unethical, and remain unrealized. But with the help of the Fukuoka Asian Art Museumin Japan, Ms. Lu was able to obtain dead frogs that had been used in a medical dissection to produce one of the works. The result is a six-minute video called “Reanimation! Underwater Zombie Frog Ballet” (2011), in which frogs wired to electrodes dance in water to a funky electronic beat. 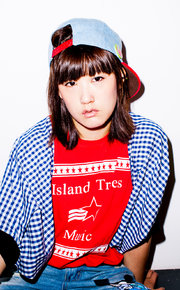 Since graduating in 2010, the Shanghai-born Ms. Lu, 30, has produced a series of boundary-pushing multimedia works that explore neuroscience, mortality and religion.

In “Uterus Man” (2013), she collaborated with musicians, manga artists and others to create a project centered on an anime-style character called Uterus Man who rides a “pelvis chariot” and skateboards on a winged sanitary pad.

In “Moving Gods” (2015), which was featured in the China Pavilion at the 2015 Venice Biennale, Ms. Lu redefines the nimbus — the halo often seen in images of sacred figures — in what is meant to be a “sabotage” of ancient religious icons.

Her latest work is “Lu Yang Delusional Mandala” (2015), presented in September in a solo show at Beijing Commune. It applies concepts like stereotactic mapping and deep-brain stimulation to simulate a “delusion” in which Ms. Lu destroys her own body and work.

In an interview, Ms. Lu reflected on the human body, growing up in Shanghai and her collaboration with a Japanese asexual artist.

Q: How did you become interested in the subject of the body?

A: When I was a child, I spent a lot of time in hospital emergency rooms because I had asthma. So naturally I became interested in the idea of medical treatment and the body. The body is fascinating to me because it is totally objective. There is no right or wrong. That’s why in my work I don’t indicate the value or the aim of things. I use a very cold and calm approach.

Another theme in my work is religion. It’s more difficult to get into religion when you’re older because you’re more skeptical. But growing up, my family was pretty religious. I often read my grandmother’s books about Buddhism, which made me really interested in religion.

Q: Does your family have a background in art?

A: My parents were just ordinary workers at a medical company. Now they’re both retired. I don’t talk about my art with my parents. But I think they’ve probably looked up my work on the Internet. They know I make art, and they know I can make a living. I can depend on myself, so for them that’s enough.

Q: Did you know from a young age, growing up in Shanghai, that you wanted to be an artist?

A: I always dreamed of being an artist. But after I entered middle school, I didn’t think it would be possible. I didn’t even know what artists did exactly. I only knew that artists could be creative in their work.

I was able to get into the China Academy of Art because I really liked to paint. I was growing up at about the same time that Chinese contemporary art was beginning to emerge, so I learned about contemporary art early on. When I was in middle school, my classmates were interested in the latest trends, but I wanted to find more special things, so I started going to galleries and listening to Japanese music. Later, in high school, I subscribed to some magazines about contemporary art. 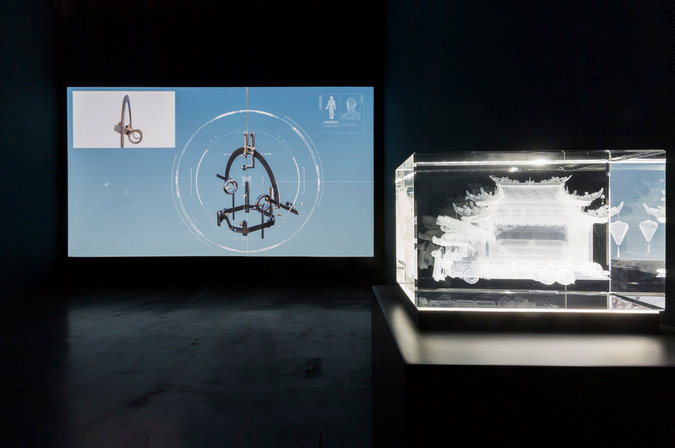 Q: What were some of your early influences?

A: I used to like Western rock music, but I don’t really listen to it anymore. I was also exposed to Japanese culture at an early age. In Shanghai, a lot of television channels played Japanese cartoons, so they had a big influence on our generation. My favorite thing today is still mainstream culture, like sci-fi movies with really good computer-generated effects and other really good Japanese animated movies. I don’t really like art-house films.

Q: You often collaborate with other nonvisual artists, like the sound artist Wang Changcun and the composer Du Yun. How do these collaborations come about?

A: Sometimes I search for musicians and sometimes they find me. I’ve collaborated with musicians who work in opera, death metal, electronic and pop music, and hip-hop. They are usually acquaintances or people I’ve discovered on websites like SoundCloud. The Internet is quite useful, because I don’t really interact with people that much. As long as I have access to a computer, I can make art. 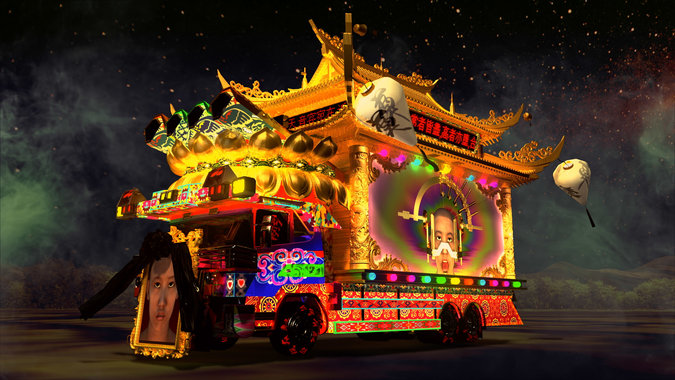 Q: What are the websites you go to?

A: One is Bilibili, a website for watching cartoons. I visit this every day.

When I finish a work, I’ll upload it on Vimeo. For me, it’s important what average people online think. They’re not like people in art circles who might be really phony and say, “Oh, I like your work so much.” It’s boring if the only people who see your work are from one circle.

Q: Do you identify as a Chinese artist?

A: It’s kind of inevitable that you’re labeled as one. If I have an exhibition abroad, they always say, “This is a Chinese artist.” But that’s why I say that I want to live on the Internet. That way, nobody knows who you are. People online only care about your work and whether it’s any good. They’re not thinking about who the person is behind the work. By living on the Internet, you can abandon your identity, nationality, gender, even your existence as a human being. I rather like this feeling.

A: The human embodiment of “Uterus Man” in my work is a Japanese man named Mao Sugiyama, who had his genitals cut off and served them in a meal to other people. When I first heard about him I thought he sounded really weird. But then I noticed that he was a painter and that he had said that he hated gender labels and if he was just a painter then why did he need to have a gender? I was really moved so I got in touch with him. That’s how we started collaborating.

A lot of people think it’s a feminist work, while others think that it’s a superhero story. People project what they’re already thinking. My own opinion is that you can’t choose your gender when you’re born and it only matters in a social context. When you’re contemplating something, you don’t consciously think, “As a man, I think this” or “As a woman, I think this.” That’s why I think society’s gender divisions are pretty absurd.

Q: You said you basically live on the Internet and your work is influenced by things you see online. Is there any influence from real-world events or politics?

A: The older generation of artists really like to make works concerning politics or the nation. But I think there are limitations to this creative method. If you don’t understand politics, or if you’re not from that country, you can’t understand the works.

I don’t really understand these kinds of things myself. I’m really scared of going to museums, because I don’t understand a lot of the works. There are things that are common to all human beings and even animals. Basically, I spend my time chasing after those universal things we all have in common.