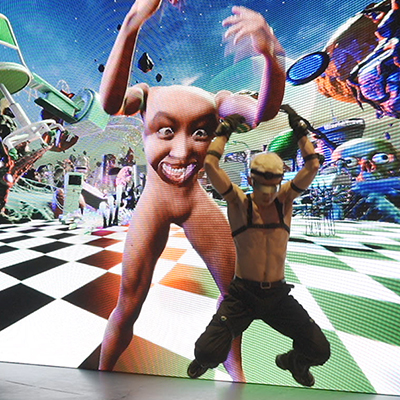 Screenshot of the “Uterus Man” game, produced by the Fukuoka Asian Art Museum (all images by the author for Hyperallergic unless otherwise noted)

The arcade is more than a place to play games. It promises a critical distance from reality, creativity independent of usefulness, and realms of fantasy that are “resistant, but not oppositional, in relation to the dominant societal logic,” as Graeme Kirkpatrick put it in “Aesthetic Theory and the Video Game.” Under its powerful reward system of gratifying sensations, players learn and manipulate new rules while feeling empowered to evade physical law, moral obligations, and mortality itself — death is inconsequential while revival is a matter of inserting coins, not entirely unlike the indulgence system of the Catholic Church. The arcade grants legitimacy to anything outright bizarre and sometimes unethical — say, killing and colonization — by telling you it’s just a game. But is it? The line is incredibly fine and fuzzy.

If there’s any space that both parallels and accommodates Lu Yang’s highly exhilarating and provocative — by which I mean genuinely politically incorrect — works since her art academy days in the late 2000s, it’s a sprawling arcade, a cornucopia of weirdness and inappropriate ideas. Her works are not simply pushing the envelope of new media art by unreservedly venturing into such areas as neuroscience, behavioral psychology, 8-bit aesthetics, and the ethics of gender, cyborg, or medical trials. To come to terms with her practice as a whole entails acquiring new sets of knowledge and vocabulary beyond prevailing theoretical discourse or “international art English” like lateral hypothalamus — a part in our brain responsible for hunger — Yidam — a meditation deity in Tantric Buddhism — or kimo kawa — a Japanese term for “disgusting and cute.” It takes curiosity and intellectual prowess to enjoy exploring the multifarious and profound connections from one project to the next; the tunnels in the rabbit holes are intricately linked.

Lu does not just “dabble in” or “appropriate” scientific discourse; she goes beyond the dilettantism of so many contemporary art practitioners. With “Wrathful King Kong Core” (2011), for instance, she does not update religious iconography with contemporary material culture, but visualizes the anatomical and neurological structure of a wrathful deity, diagrammatically explained and X-rayed, showcased from multiple angles and filters with extensive drop-down menus that explain terminology and crucial data. The way everything moves evokes the unique kinetics and tectonics of virtual reality. In Lu’s deadpan superimposition of divinity and humanity, the corporeal and the metaphysical, the multi-headed, multi-armed deity is as luxuriously objectified as any playable character in video games.

“Uterus Man” (2013), another of Lu’s perverse heroes, was inspired by the female reproductive organ that resembles both a cruciform and a caped figure with arms stretched and back turned. A fully conceived character with specific superpowers, weapons, and a fancy mount — the pelvis chariot — that mirror the organ’s versatility, Uterus Man is the star of a franchise that encompasses manga, feature film, and a professionally developed video game (produced by the Fukuoka Asian Art Museum), making its New York premiere in Yu Lang Video Room at Ventana 244 and the recent exhibition Lu Yang Arcade atWallplay. (Full disclosure: I curated these exhibitions of Lu Yang’s work.) Though the female reproductive organ is jarringly centralized in the project, Lu Yang is not the least bit interested in exploring feminist tropes; her geeky, wicked creations tease with the malleability of gender and sexuality, finding a kindred spirit in Mao Sugiyama, a Japanese man who had his sexual organs surgically removed to become asexual and was subsequently invited to cosplay as Uterus Man.

Lu’s works are sometimes categorized as bio-art, which aptly captures her proclivity for involving live animals and electrical stimulation in her earlier pieces, like “Happy Tree” (2009). The remarkable thing, however, is that while she allows herself to be carried away by the science — teaching herself the basics and the not-so-basics — she never loses sight of the art, which blurs the disciplinary borders and makes the resulting works more interesting and perverse than the sum of their disparate parts. In her most recent, “Cancer Baby” (2014), Lu kawaii-fied malignant cancer cells and turned a despair-inducing disease into cute little creatures that appear as 8-bit characters in a disturbingly cheerful music video, a retro video game, and small sculptures of cute, metastasized organs including the brain, the stomach, and even the heart — a subtle joke as the heart is the only human organ immune to cancer. The associative dissonance inherent in the kimo-kawa “cancer baby” characters caused considerable discomfort and criticism when the project was first exhibited in Shanghai, stirring up controversy beyond art circles in a country where the growing cancer rate is taking takes a real and heavy toll on society. Lu’s irreverent cancer baby universe forces viewers out of their denial both of the disease and of those who suffer from it.

With “Cancer Baby” and many previous works that probe into the mechanisms of abnormality, Lu finds a Frankensteinian way of making her chosen phenomena visible and audible. She created a virtual band that made music by electronically manipulating the uncontrollable movements of Parkinson’s disease patients (“Krafttremor,” 2011) and rendered life, death, and prosthetic limbs in technicolor tableaux based on subjects’ body heat using an infrared camera (“The Cruel Electromagnetic Wave Above Absolute Zero,” 2012). While Lu frequently sets up her projects in labs or lab-like environments, her works are not “experimental” in the casual sense of the word. She works with great conviction, coolly laying out meticulous diagrams and edging into grey areas of neuroscience and ethics like her heroes, the behavioral psychologists B.F. Skinner and Stanley Milgram, whose radical experiments in the 1960s asked daring and difficult questions about human behavior.

“New media art has to hurt,” Lu often tells me. I take this to mean that it has to pinch, provoke, and cause real disturbance, rather than merely producing new kinds of pretty images or, worse, cheap interactivity and weak humanism. But she also maintains that “it has to be fun,” which I take to mean that it should be receptive to intellectual stimulation while unabashedly going deeper, in true subcultural, fetishistic fashion. As a fellow millennial who grew up in China in the 1990s, I share her obsession with the cultural imports from Japan — anime, video games, TV shows, and horror films — that left such indelible marks on our generation’s collective memory. A more opportune alignment of our interest lies in social psychology and science fiction, disciplines that we both believe share more common ground with conceptual and socially-engaged art than commonly accepted. The arcade, in essence, is our inter-disciplinary playground.