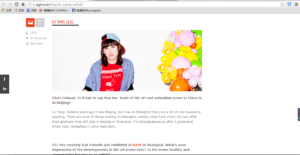 Chris Colman: Is it fair to say that the  heart of the art and animation scene in China is in Beijing?

Lu Yang: Several years ago it was Beijing, but now in Shanghai there are a lot of new museums opening. There are a lot of things moving to Shanghai. Artists come from every city but after they graduate they will stay in Beijing or Shanghai. I’m Shanghainese so after I graduated (from CAA, Hangzhou) I came back here.

CC: You recently had a booth and exhibited at DAFF in Shanghai. What’s your impression of the developments in the art scene here? Is the scene healthy and encouraging for you as an artist?

LY: It depends what area you’re looking in and what information you’re receiving. I think people in Shanghai move in different circles – there is the contemporary art scene, the illustration scene, the fashion scene.

Take contemporary art exhibitions – in my opinion, a lot of people want to stand in front of my work. That’s good for me. But on the other hand, if I want to spread my work to a wider audience, it’s hard compared to the fashion scene.

CC: This month we screened the Uterus Man animation at the CAGN Indie Animationnight.  Tell me about the project’s origins.

LY: People are very serious about gender – they really care if you’re a man or a woman. Before they are born, people cannot choose their own gender. But after that they have to play the role of a man or a woman. If you are woman you will say that women are the best and if you are a man you will say men are very powerful. For every human, there is a spirit inside – but you cannot choose the body. You just use this body to realize what you want to do. I want to make a joke about gender.

CC: You worked with Mao Sugiyama [Japanese artist who had his genitals and nipples surgically removed] to be your human embodiment of Uterus Man. How did that collaboration come about?

LY: It was when I started working on the Uterus Man storyboard that I first heard about him. His name always changes. He is asexual. He removed all his genitals. There was a lot of news about him online and a lot of people think he is crazy. I connected with him on Twitter and talked a lot about sexual issues and we became online friends. During that time I was making Uterus Man and I told him about the project and asked if he was interested in cooperating with me. Once he knew what I was doing, he said yes. So I went to Tokyo for 2 months and we did the photography.

CC: What are your plans for Uterus Man?

LY: The 11-minute film is done, which was a huge amount of work. Now I’m working on the Uterus Man game. It’s a computer game on different platforms – smartphone and online.  The game is ongoing. Shintaro Kago is also a Manga artist so he is making the first episode of Uterus Man. If I get a chance, I’d like to continue the project.

3 years ago I cooperated with a museum in Japan – Fukuoka Asian Art Museum – and we worked together on the Underwater Zombie Frog Ballet where we used electricity to stimulate dead frogs. They were from an anatomy course, so they were already dead.

That was our first cooperation.   They asked me what I wanted to do this time. So I said I want to make a game. Before they wanted me to make a live performance piece or some new media work but I wasn’t so interested in mapping or something. People can become more involved with a game. Then they helped me find the team.

CC: What’s the nature and object of the game?

LY: We used Unity to make it so it can be exported to several platforms. It’s a 3D game, running and shooting. The mission is to show the different skills that he has. We had very limited time and budget to make it, so it is only a small game, but we tried our best to show his skills and also make it look great visually.  One of his skills is Y Chromosomes, so after you get XY power, if the enemy is a male, you can change him to a female. It’s very easy to kill him after he becomes a female. The enemy is a male Kaiju.

CC: Tell us about the products you have created in addition to your art?

LY: I only started making products for Cancer Baby because cancer is related to the human body. If you use the cancer ring or the cancer necklace, it’s very close to your body and it’s like bringing the cancer cells out of your body.  There is one Uterus Man t-shirt and I have cooperated with one brand called Content which used my illustration on their clothes.

CC: What’s been the reaction to Cancer Baby?

LY: All my work creates two extreme reactions. One is very good, and one is very, very bad. Some people will leave very bad comments online. It was the same for Uterus Man.

I wanted to try to make cancer more cute, kawaii or something. I want to break the serious view of death and disease. In human history, people have had very different ideas about death. Before people had a natural feeling about it, they thought they could die any day, but after hundreds of years they started to believe death was a long way away. Sometimes they even forget they will die at all. All my work says that death and disease are just a part of life.

I’ve had some reaction from old people.  I did some work related to Parkinson’s disease (Krafttremor) before.  I made a speech in Japan at that time. Some old people were there, and afterwards they came to me and said that the work was really related to their life, because they had friends that had died from this disease. They were faced with this problem. Young people just think, ‘oh this is cool, it’s an electronic music video’.  I think the audience interprets it in different ways. All ways are fine. I can’t control people’s thoughts.

CC: Talk us through your work process. What’s your preferred medium? Do you have a team?

LY: I like to use all media. I don’t focus on just one. I just have my idea and use the different kinds of media to make it. I find people to help me build the model and create the fabrics – it’s too difficult for me to do all of that. I do the rendering and the texturing and all the visual things by myself.   I have an animator to do the movement – but I control the camera. I’m the director.

CC: From where do you draw your inspiration?

LY: Everywhere. It depends which project. For Uterus Man I used the Japanese form to express my idea but maybe next time I’ll use a different form. It’s just one of my interests.

All my ideas come from different areas of culture, not only in contemporary art. I like Japanese animation and pop culture and psychology and medical things. I don’t really know what other artists are doing. I just focus on my own work in my own world.

Chris Cunningham is interesting.  Music is very important.  When I was a child I really liked music videos – the combination of music and visual. Recently I’ve been listening to really stupid, emotional music. It helps me relax. But it’s nothing too deep. I also like Idol Culture.  I’m a stupid fan and follow several idols, like handsome Japanese boys.  J-Rock.  Singers with huge amounts of fans.

CC: Does your nationality play any role in your art? Do you think of yourself as a specifically Chinese artist?

LY: I have my own spirit inside. When I was a child I received all this information from every other country’s culture. I just want to be a human being and create something. In this society you must have a title. I don’t want titles. I don’t even care if you call me an artist.

CC:  Do you feel you feel related to the other animation artists on the CAGN screening bill, or a part of some sort of movement?

LY: Of the other artists on the bill I just know Lei Lei from the net. I don’t know the others. It’s fine that you put my name in that list though. There are so many media events and exhibitions and each time there’s this list and that list. For me it’s good just to show my work to more people.

CC: Is there a purpose to your work? What are your goals as an artist?

LY: The aim is only to finish the thing in front of me. Before I even start work on a project I know how the audience will react – the audience is not so important for me. I hope my work can attract certain people. I just want to put my work very objectively.

CC: Are you thinking about your next project?

LY: Maybe the next project will be related to religion and medicine. 3 or 4 years ago I made a project related to religion and science.  I was reading a book about this Tibetan deity, he looked very angry and people were very afraid. I also did some research about how emotion comes out in your brain. So that was a totally different way to express how people feel emotion. I wanted to combine those two areas together.

CC: Will you be working in China?

LY: I’ll be travelling and working a lot in Japan and then in September I’ll be going to New York for 4 months. It’s for an artist-in-residence program. I got the offer several years ago but I could never make it, so finally I can take the chance.